Ever heard of Shadow DOM? If you haven’t then this article is definitely for you (and if you already have, you should still read this ;)).

Despite of the “scary” name it has there’s nothing to be afraid of. Shadow DOM is a friendly little fellow who’s here to make life of web application developers easier.

In this article, I’ll present thoroughly the capabilities of Shadow DOM and how one can easily create independent widgets by encapsulating their code with it.

At the moment, Shadow DOM API can only be used and accessed with Chrome 25+ Beta or Chrome Canary. Download either one of them and start inspecting what Shadow DOM has to offer.

To access Shadow DOM via Chrome Console, you have to enable it from Settings -> General -> [x] Show Shadow DOM.

What is it About?

Shadow DOM is described by W3C as “The shadow DOM allows multiple DOM trees to be composed into one larger tree when rendered”. In practice, this means that it’s possible to create shadow roots and include them into document tree nodes, better known as shadow hosts. Shadow roots can contain child nodes, and these nodes aren’t exposed in traditional DOM tree at all.

Let’s have an example: suppose we have an input element which type is date. In modern browsers this type of element contains a date picker to provide some additional functionality and accessibility for the user.

This is where Shadow DOM enters the stage: date picker is constructed as a Shadow DOM subtree where input field acts as an shadow host. 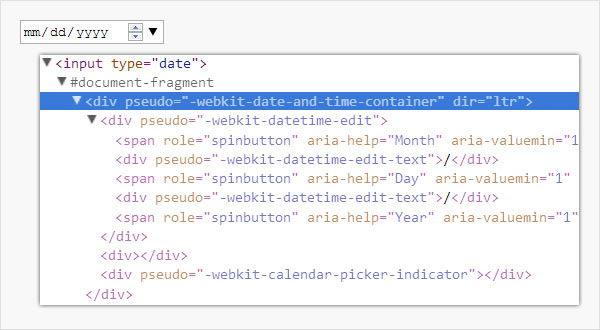 Even though we can view the Shadow DOM of browser components, we can’t directly access to them.

Now that you’ve set up and you understand the basics about Shadow DOM, it’s time to start playing with it.

In our case, we want to create a simple custom widget which displays JSON data structure in a table. I won’t go in to the deepest details of the widget, but I’ve created a live demo of the widget I’m using as an example.

With these guidelines we make the life easier both for us and for the developers who are using the widget.

We start by creating a template for our widget:

Notice: if you want to use external template files (like I do in my demo), use valid HTML elements, eg. by switching template element to a section.

Now we have a basic HTML structure set up and we can add some styling:

This is it. We have a HTML structure and CSS styling ready for the widget and now we need to do some JavaScript magic. Basically we want to fetch the template elements and use them as shadow root children elements for displaying the JSON data. In order do to this, we need some attributes for the jsontable element:

What we’ve got here is:

There are both static and XHR examples in my demo, check them out for further guidance of using the data-source and .dataSource setter.

We will start by accessing our custom HTML element called <jsontable> and creating a shadow root for it by calling document.webkitCreateShadowRoot (notice the webkit prefix):

For the simplicity of this example, we access only one jsontable element at time and create the functionality for it.

Next, we need to refer to our template and append it to the shadow root:

After this, following steps are:

Both of these steps are done in my live demo I’ve created for this article.

This is it! What we’ve achieved is an independent widget which doesn’t interfere with the other DOM at all.

Sometimes, one may need to access Shadow DOM externally and manipulate it. This is possible both with CSS and JS.

In order to allow CSS access, we need to declare <shadow root>.applyAuthorStyles = true;. In our example, I made a setter for it (see live demo for further details):

This allows accessing the styling whenever we need to, ie. we can enable and disable in on the fly.

JavaScript access can’t be done with direct reference (see example), but it can be done by using webkitShadowRoot property, eg.:

This allows manipulating the Shadow DOM whenever it’s needed. At the moment it’s not even possible to protect your Shadow DOM from external access (see Bug 16509 – [Shadow]: Consider isolation).

Current status of course is that Shadow DOM can’t yet be used purely because it has landed only on few browsers and the work is still in progress. However, we can play it with (just like we did in this article) and consider the possibilities it offers in the future.

Here are some of the resources I encountered while exploring the wonderful world of Shadow DOM:

2 thoughts on “Meet Shadow DOM – a New Kid in Town”